In a year that has been dominated by the Yeehaw Agenda, from the return of assless chaps to record-breaking singles, Caroline Polachek wants to talk about pirates. Ahead of the release of her debut album under her own name, the former half of indie duo Chairlift has returned with a swashbuckling new music video for her single "Ocean of Tears."

The new visual combines the emotional grandeur of Enya's nautical ballad "Orinoco Flow" with the washed out melancholy of a Wes Anderson film with Polachek as the lovelorn pirate captain setting sail on the high seas. From swabbing the deck to hanging out of the crow's nest, Polachek just about ticks all of the boxes on the pirate list but in a way that feels more "Jean-Paul Gaultier editorial" and less "dead-eyed server at Jimmy Buffet's Margaritaville." It strikes a balance between a necessary amount of camp and the cinematic flair the song's soaring vocal gymnastics call for.

In a musical climate that is currently in love with the image of a dusty wanton cowboy, the waterlogged pirate is a refreshing change of pace. Both still capture this romantic fantasy of a self-sufficient loner with an affinity for statement headwear, but whereas it feels like there is a glut of singing cowboys flooding the market there is wealth of potential for a pirate revival to win over our hearts with updated sea shanties and plank walking antics. (An "Ahoy Agenda," if you will.)

Our latest glimpse inside the visual world of her forthcoming record, Pang, "Ocean of Tears" stands out as belonging to a distinctively Polachek world: ornate, romantic, lush, and delightfully surreal. We caught up Caroline following the release of the official music video for "Ocean of Tears" to chat about her inspiration, what to expect from her upcoming album, and what her pirate ship would look like.

Is it true that the video for "Ocean of Tears" was inspired by the Pirates of the Caribbean ride at Disneyland?

Yeah. Exactly. I moved to LA a few months ago and I've never been to Disneyland before. I was with Matt Copson, director for the "Ocean of Tears" video, and while we were on the ride, I turned to him and was like: 'How has no rapper done pirates in a video? It seems like the most obvious thing for a rapper to do.' Matt said: 'Well you just have to do it first.' I knew I wanted to make a music video for "Ocean of Tears" at the time. I already had a color palette in mind for it that was inspired by the snow paintings that Monet did which are all really amazing because they take place in these scenes that are supposed to be all white, but they're actually extremely colorful. These kinds of bleached out pastels. "Ocean of Tears" is actually a sad song and quite lonely, probably the hardest track on the record, I liked the idea of setting it in this anemic world. When Matt said I should use the pirate video for myself, it was just a massive lightbulb moment because I was like: 'Right. Obviously, combine those two ideas and that's 'Ocean of Tears.'"

"I felt like the pirate story of taking no prisoners, risking your life for the treasure was a big metaphor. In my case, the treasure is love and not money."

How did it move from there, what was the process like?

It started with looking at what the traditional pirate stories are, anything from walking the plank to the hook hand. We were sifting through all the iconography and clichés and legends, reading about things like Davy Jones' Locker, which is a metaphor for death, and actually weirdly steering clear of the Pirates of the Caribbean films because they really are their own thing. I wanted to go back to what my childhood impression of what pirate lore was like. The song is really about taking a leap, taking a risk to be with someone you love, being so far away from them, and the kind of mania that makes you ask yourself: Am I doing the right thing? Is this good? Does this person even love me? But at that point, you're too far in and you've set out on this voyage of reshaping your life to be with someone. I felt like the pirate story of taking no prisoners, risking your life for the treasure was a big metaphor. In my case, the treasure is love and not money. That's why the treasure chest has a beating heart in it. 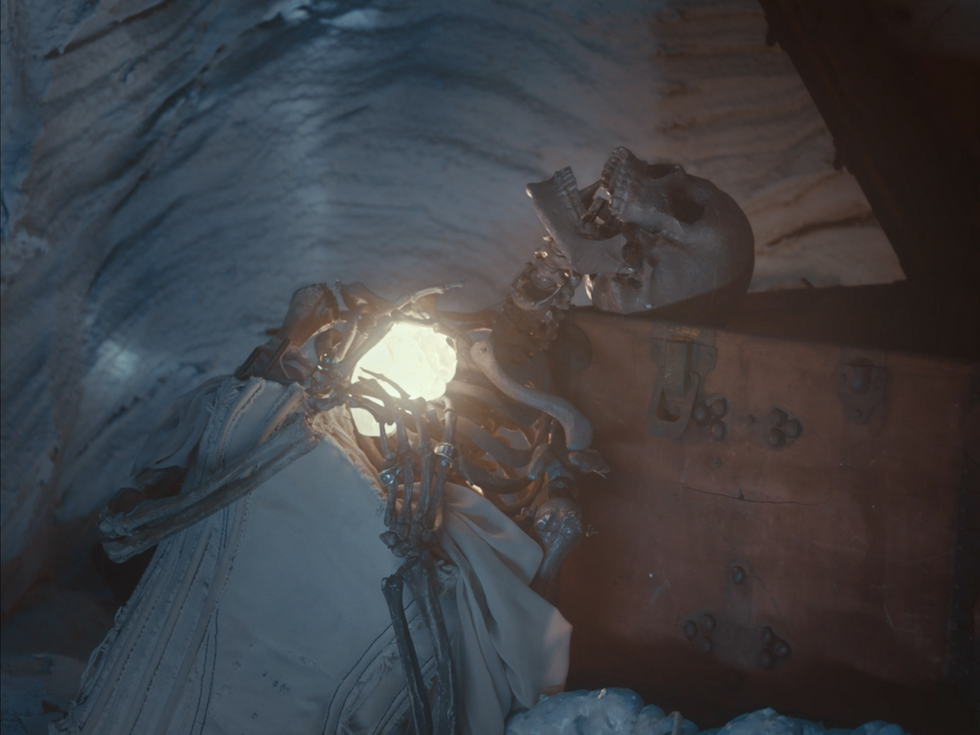 It was amazing. I forget all the names of the rides, but I did the Jungle Cruise, this log ride that has all these rabbits and bears doing really horrible things to each other; the haunted house ride, which is incredible and so holographic Victorian; the Pooh ride, which is weirdly '90s-'60s themed rave. It's amazing. The level of attention to detail and it's just all the wild human imagination that went into that place. Those things only happened because of people believing in art, stories, imagination, and creativity with every ounce of their being and defying the economic gravitational pull that makes you not do that. It's a miracle that place exists and it gives me a lot of inspiration on a deeper level.

What did you take away on a deeper level with it?

It gave me a renewed commitment to externalizing the pictures that are in my mind. Physically doing everything I can to make it come to life because it's really difficult, especially in the music economy right now, to get things made. That lit a fire under my ass to keep doing it to the best quality that I can. 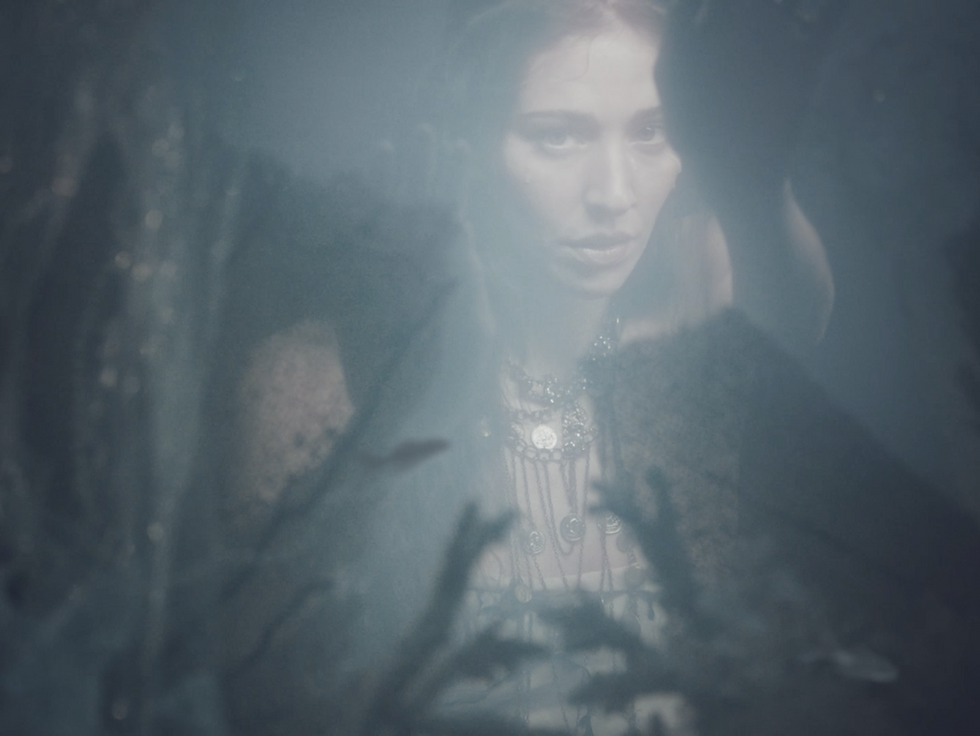 What were your experiences with pirates like as a child?

I guess reading illustrated kids books for one. Peter Pan is obviously a huge one. Hook, a classic. I wanted to be one of the mermaids. Growing up as a girl, the pirate stuff was always so geared towards the boys. It was a boys' Halloween costume, it was a thing for the boys to be. Approaching it from a more romantic, feminine angle is so much fun. I learned that pirates had their own institutionalized form of gay marriage which was quite revolutionary and ahead of their time.

"Growing up as a girl, the pirate stuff was always so geared towards the boys. Approaching it from a more romantic, feminine angle is so much fun."

Yeah! I was reading about that recently actually, there are some really famous female pirates who were lovers.

Yeah! It's this really amazing utopia. It does show where things sit right now in America in 2019. It's not so much as an escapist impulse as it is an anarchist one to do things on your own terms, totally abandon the rulebook or the way society has structured life. 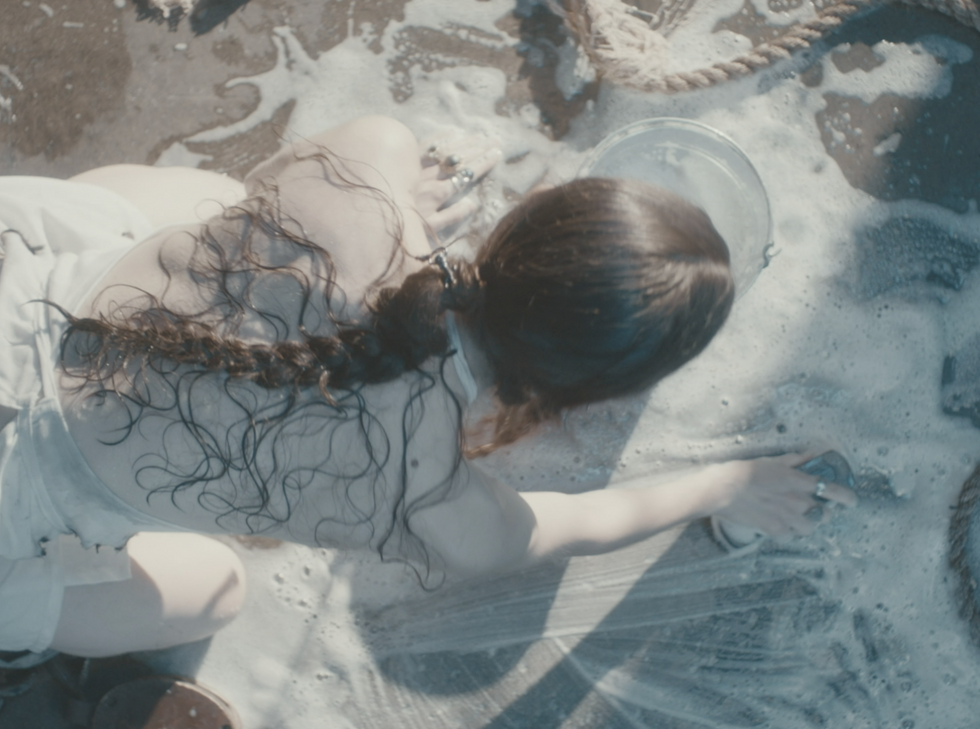 How do you think that compares to the cowboy renaissance?

I think the whole cowboy trend links very deeply with the politics of Trump's America. I think people are chewing that in a very subconscious way. It's like individualist, it's territorial, it's hypermasculine, it's a return to land, but only land seen through the filter of domination and harming and not actually wilderness. With pirates, there is a more punk anarchy angle. It's finding your own way, it's DIY, it's communal it's removing yourself from a system rather than being the colonial edge of it.

"Pang for me is this very real feeling of your body telling you that you need something."

Can you paint me a picture of what Caroline Polachek's pirate ship would look like?

It's covered in tattered flags that have indiscernible writing that's written in the blood of my enemies on the flags. There is a skull at the head of the ship. The sails probably follow my will, I don't actually have to go up and adjust the sails. I have a telepathic relationship with where I want to go. The ship would probably be called "The Dream Slicer." It would be painted in weathered shades of white and gray and green. My cabin would be a circular room where the entire room is a bed, just a giant circular bed. No one is invited, unfortunately, it's really just a ship for one where I have to deal with my romantic torments. 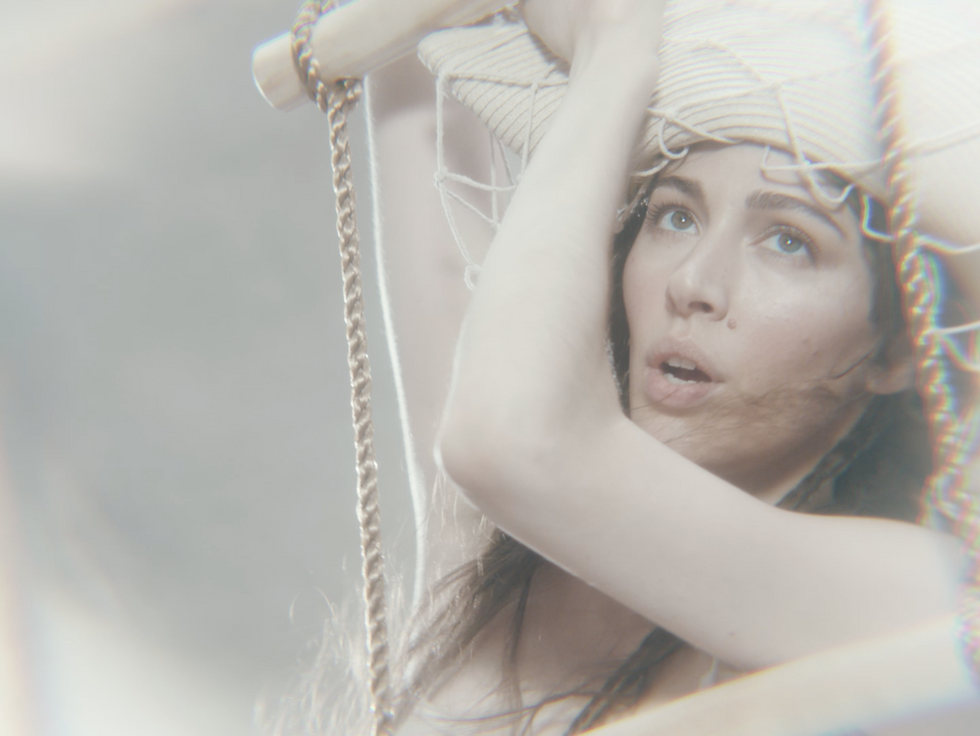 What should we expect from Pang?

"Ocean of Tears" plays into the core of the album. The three songs out right now paint an accurate picture of where I'm going with it. Pang for me is this very real feeling of your body telling you that you need something. It's not something that you're conscious of. On a very simplistic level, it's when you have not fed yourself and have forgotten that. Your body is telling you: "Hey, you're hungry."

I came across the title because when I started making this record, I was having really overactive adrenals. I was getting adrenaline rushes for no reason over the course of a few months. It was kind of fun in some ways because you're on a high, but it's also terrible because it's difficult to sleep. Your heart rate just goes racing for no reason, you lose your appetite. I dropped a lot of weight in a really unhealthy way. It expands the capillaries in your lungs so you're receiving more oxygen than you normally would be. You're literally high on oxygen which is part of the fight-or-flight response. It dilates your pupils too so you're receiving more light than you should be receiving. I felt like all of these things, on a very sensory level, was what I wanted out of music. I started thinking about panging and desire and needs and lack and hunger, but also combined with this hyper-sensory high. Seeing more light than you should, getting more oxygen and being high on that.

How did you go about realizing that in the album?

It all kind of merged together in my mind as this feeling that I've always looked for in music. Music that is euphoric but also deals with suffering and need on a very internal level. I really dedicated myself to following through with that concept, but I was also living through it as well. A lot of the collaboration on the album is with Danny L Harle, who became my main studio partner — not over the whole record — but most of it. He and I were coming at this from completely different angles. Me, from more of an organic, melodic place with my band background and him from more of a trance, electronic angle. Dan put it in a really beautiful way as being like "Building landscapes of the mind." I was really rigorous with the poetry and the text to really make it feel honest and as possible.

Pang is out this fall via Columbia Records. You can catch Caroline Polachek on tour this fall in select cities across the US and Europe.

Are We Human? Or Are We Fuck Boys?

Puppets and Puppets Is Serious, But Not Too Serious

BTS Reveals the 'Map of the Soul: 7' Track List